Next month, what was once a hope and desire, will come true. Ever since I learned of the organization PCi (Professional Climbers International) I had hoped and requested that they would put on a clinic in my neck of the woods. Well, Midwest Climbing Academy has made it happen.

And its official… I invested my birthday cash and will be learning directly from 3 of the best climbers and trainers in this sport I love. World Cup Boulder Alex Puccio, hometown hero and outdoor ‘rockstar’ Alex Johnson, and hardman all-discipline climber and PCi founder Kevin Jorgeson will be sharing from the wealth of their knowledge.  I opted for the more general, efficiency and effectiveness clinic rather than the more specific competition style clinic. 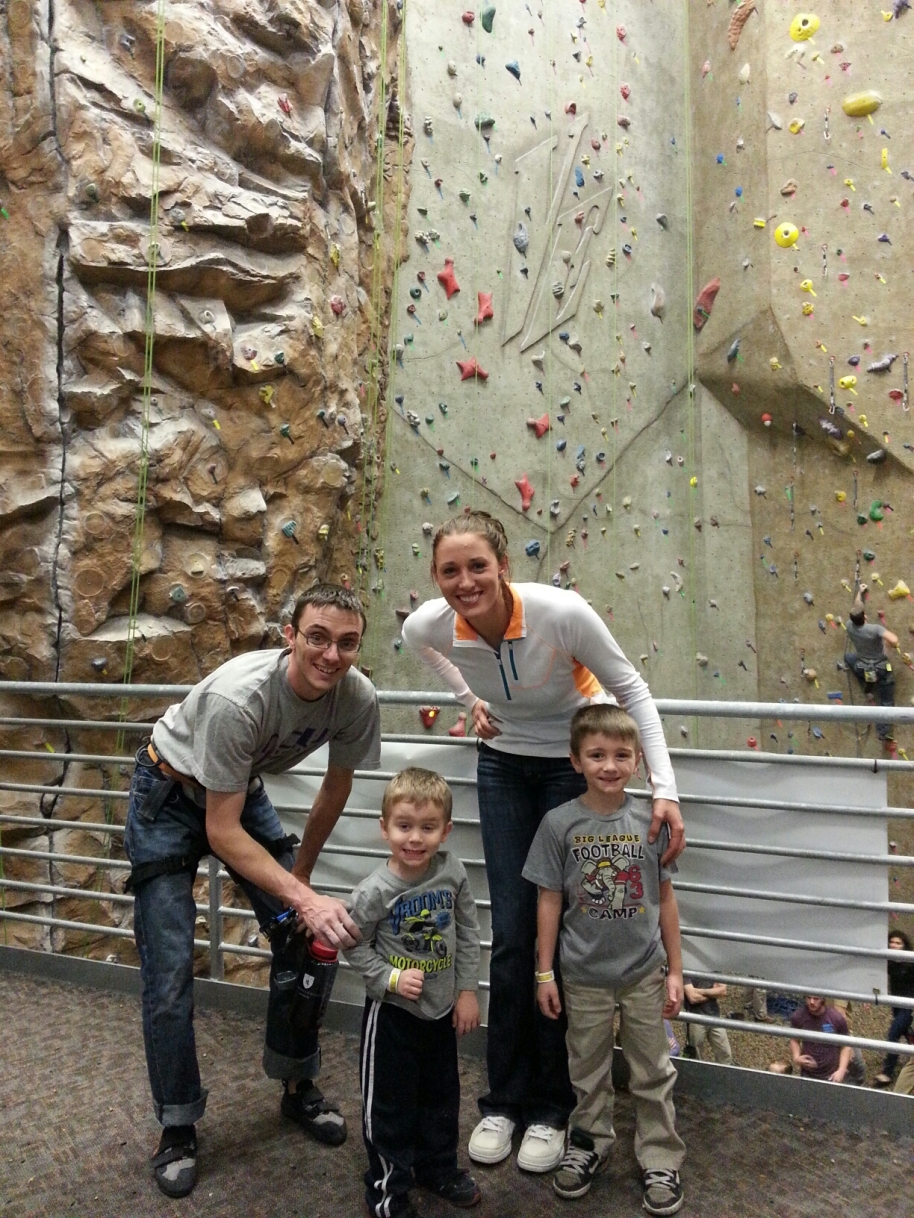 Look for an update soon to see how it went.

I sparked a conversation with some local climbers about the strong youth climbers coming out of the Midwest.  As many online forum conversations often go, this one took a slight turn in a different direction, to coaching (or sometimes lack thereof).  In that exchange I received this very solid quote from one of the strongest climbers out of Minnesota, Nic Oklobzija.  Yes, that Nic O.  The First Ascentionist of The Raven (V12) and co-author of the upcoming Midwest Bouldering Guide.

“The only things holding [climbers] back in the Midwest are that our facilities are ill equipped to train at the same level as our counterparts out west and our coaching. I think the coaching is more a national level problem not just the Midwest. [Certain teams] are making it better but it does not compare to the same level athlete training that other sports enjoy.”  – Nic Oklobzija

So why has it taken so long for climbing to catch up?  Lets dig into this just a bit.

Rock Climbing as a “sport” is actually relatively new.  Early on, climbing was almost purely an adventurous activity.  As the focus moved slowly away from Aid Climbing to Free Climbing, the challenge to increase both the difficulty and volume of climbs began to gain notoriety.  But information moved slowly.  And often inaccurately.  Like the telephone game we would play as children.  Hearsay and anecdotal.  All the while, in many sports around us, methodical and documented study was being done.  Which leads us to today.  Climbing is right there.  Missing by a hair on the short list into the Olympics.

Now I understand that Rock Climbing is not a team sport, but I wrote the above paragraph to show the vast contrast.  Climbing probably compares more closely to swimming.  I can almost guarantee that an elite swimmer has a stroke coach, maybe several that specialize in each discipline.  They likely have someone that consults them on the strategic pieces within a meet.  They have a strength & conditioning coach, maybe one for each.

So this begs the question, why do the majority of climbers still get their information from hearsay, or worse their own personal trial and error.  Don’t get me wrong.  I am a strong proponent of the Try-Fail-Adjust growth philosophy.  By all means, try things.  And learn from everything you do.  But as the saying goes, learning from other people’s experiences is truly the best teacher.  So check this math out!

While the discussion of having coaches makes 100% sense when it comes to competition climbing.  I’d like to expand one step further.  In other sports/activities, athletes have the option for a personal trainer  to help them improve.  Example: my wife runs marathons and now triathons.  Not professionally or for sponsorships, but for personal gratification.  She contracted a run coach.  She’s worked with a triathlon coach.  She has a swimming mentor.

So even the everyday, regular climber types (those wanting to progress from 5.11 to 5.12, from 5 pitches a day to 10 pitches, or V5 to V8) can benefit from increasing the emphasis and value being placed on coaching.

A while back, likely last March based on the date stamp, I read a blog post from Sean McColl about a French Training Camp he participated in.  Right away I was intrigued by one of the activities he described as “Mangrove Power” or as my poor French translating from the diagram to the right, “The Mangrove Tree”.  At the time I was guest routesetting at a local Lifetime Fitness climbing wall.  This wall is actually pretty decent compared to other fitness center walls I’ve seen.  They had 9 top-rope set-ups and some pretty good variety of angles.  I thought of using this Mangrove Tree concept at that wall for 2 reasons.

First, to increase the volume and variety of routes in at least a 2-rope section of the wall.  I wanted to have each of the branches/roots to have a theme based on movement type or hold type.  In this section of wall, instead of 2-3 routes that were standard, there would be 16 combinations and in my plans 18. (Direct Routes on the outsides)

And second, I saw it as a way to train stamina.  One key benefit of this location was the 2 hours of childcare provided.  I was excited to develop my recovery abilities, both mid-route as well as in between attempts.  I wanted to see if I could do all 18 variations in 2 hours.

Regretfully, I did not get the opportunity to give this a try before we moved and my membership dissipated.  But the idea didn’t leave my head.  Enter homewall v.3.0 and my modified Mangrove Tree.  Modified based on the limited height and boulder focused rather than route focused.  It’s still a work in progress as I only have 2 lower branches and 2 upper branches set so far.  But here’s what I came up with. 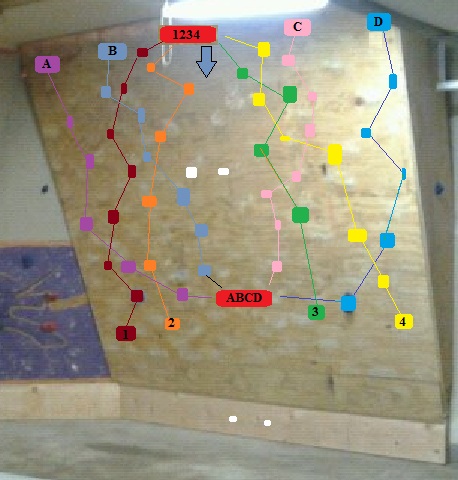 How it works: Every boulder is a combination of a # route (1-4) and a letter route (A-D).  The # routes are the bottom half of the problem.  The RED hold at the top center is the equivalent of the center point in the French Mangrove Tree.  Because these are much shorter and more bouldery, it is not really a very good rest hold, but is matchable and (*key*) identical to the RED hold in the bottom center.  As well as the spacing and size of the white foot jibs.  Once the # route is climbed to the top center, the climber drops and IMMEDIATELY begins a lettered route.

Like I said, its a work in progress, but at my disposal I will have 16 problems with 12-13 hand moves each.  I plan on working some serious stamina, climbing all 16 combinations in a set workout time.  I can tick them off systematically or by random drawing.

I’ll let you know how it turns out and, with any technological luck, possibly upload a video or two.

Thoughts? Experiences?  Please feel free to share your insight.  Or ask questions… chances are I may need to provide additional clarification.

As promised, these are my next 5 weeks of training. I know the color coordination and much of the info may not hold much meaning for you personally, but I’ve put it out there and have committed to doing each of them. Now, having done this, I know from experience that my resolve will immediately be tested. Life remains unpredictable. And I am still very much excited about spending as much quality time with my family as possible. What this means for me is that I will have to be disciplined enough to get out and train late nights no matter how draining of a day I’ve had OR (against all odds) get up early in the morning.

What you can expect from me: I will post a comment to this post immediately following my workout or at the latest the following morning. When I live up to my word I will share a quick snip as to how it went. IF I slack off and skip it, or deviate from the plan… then I will have to confess my laziness.

I was going to jump right in and share a bit of my climbing background … and I will … later. But today I would like to share my #1 favorite tool for the climber with a busy schedule. Of course this is my opinion, but I am absolutely fascinated with the HomeWall.

I am currently living in home #3 of my ‘adult’ life. Which means I am also on homewall #3. My first homewall was a freestanding A-frame in my basement den. With spatial limitations, this wall was small. But it accomplished what it was intended to do, and that is … to inspire and teach me for future renditions. Secondarily, I did gain good finger strength, but very little footwork and movement technique was allowed. Whilst training on this, we were in the process of planning and executing a move. Of course, the option and scope of a homewall in our next abode was one key factor in our decision making.

Home #2 ended up being a townhome with an average sized garage. I got 3 good years out of this wall, constantly adding little tweaks. The main sections were 15* & 30* overhanging. My favorite angle has by far been the 30*. It’s steep enough to set powerful moves at the same time as fingery/technical moves. I built the vert section for my son. He was 2 years old at the time and quickly progressed to the 15* overhang. 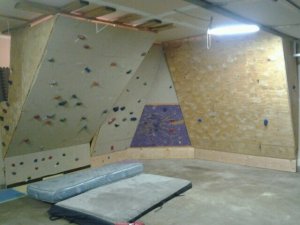 2012 brought another move, of course, bigger and better. Home #3 came with a bigger garage with a higher ceiling. I knew I wanted a 45* section. Based on available space, and all while still allowing 2 vehicles to park inside, I did my most extensive planning yet. I busted out the trigonometry archives and calculated every major cut down to the 1/8th inch. I love it. I even ended up adding an extension to a 4’x4′ section to add vertical height. The left section is 45*, then a 28*, a 17* transition, and a 23* on the right.

I will concede ahead of time that a homewall will never replace or bypass the vast benefits of a commercial or co-op climbing gym.  My main complaint to this day is the boredom that so easily sets in while climbing alone.  But for those of us where carving out the time to get to the gym is a challenge, this may just be the next best thing.  Put the kids to bed and vio’la.  Other challenges include: heating it in the winter, having/storing enough padding, AND my current dilemma … keeping the garage dry when Minnesota weather dumps 14″ of snow on you.

This melts when you pull the car in the garage, FYI

I would love to read your comments.  Do you have your own Homewall?  What do you do to make it fun?  Would you like to hire me to design/plan your homewall project? 😉

revisionist trad bouldering in the park

Because I'm too scared to climb up and clip it. Christ, Climbing, Community.

It's not choss, it's bomber

Rob Pizem's Blog for all Seasons

Climbing Together and Other Fun Adventures

A community for climbers and adventure enthusiasts to learn about training, health, gear, and exciting adventure news

Rachel Slater
A girl walks into a climbing gym...

and that was how it all started.

Breaking In My Shoes

On an Adventure in Paradise

My love for climbing

The art of moving in a vertical world